Businessmen from Turkey, India brainstorm in Istanbul to meet $10B bilateral trade target set by 2 countries 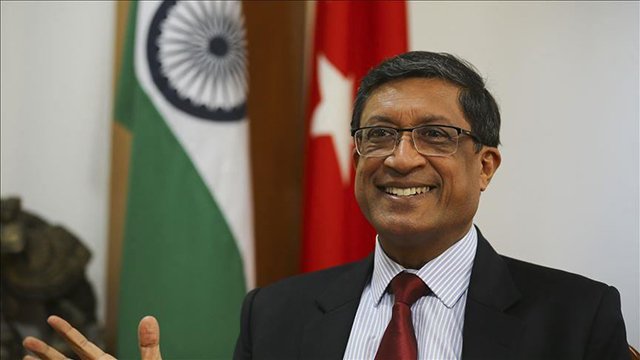 Amid winds of stagnant global growth, Turkey provides a safe haven for investors, said a financial expert on Friday.

“There is no history of controlling or seizure of deposits in Turkey,” Levent Topcu told businessmen from Turkey and India at an event in Istanbul, Turkey’s commercial capital.

Addressing the third India Business Forum, Topcu, who works as a strategic analyst with financial advisor EY, ruled out any further devaluation of the lira saying: “The Turkish market has a history of fast turnaround.”

“Growth has to come from several resources,” he said, adding: “Boosting confidence in the market will invite more investments.”

India’s Ambassador to Turkey Sanjay Bhattacharyya said that over 151 Indian companies were registered in Turkey with a bilateral trade volume of over $8.6 billion.

“There was a 23% growth in bilateral trade over the last fiscal year,” Bhattacharyya said, adding that the two countries are expected to launch talks over a free trade agreement by the end of 2019.

Manish Mohan, a representative of the Confederation of Indian Industry (CII), said that as Turkey and India are two big economies and part of the G20, “there is a huge potential bilaterally and in third-party countries for boosting trade.”

“Turkey is a gateway for energy-rich central Asia and the vibrant markets of Europe for India,” Mohan said.

“Turkey is becoming a hub for weddings, MICE [meetings, incentives, conferencing, exhibitions], and pleasure destination for Indians,” he said identifying IT, tourism, medical tourism, construction, and textiles engineering as areas where the two countries can benefit from each other.

On the occasion, the Indian envoy said the confederation is set to sign a memorandum of understanding with Turkey’s Independent Industrialists and Businessmen Association (MUSIAD) to “meet the target of $10 billion bilateral trade as set by our two leaders.”

During brainstorming over business prospects in Turkey, the Indian businessmen raised issues of banking regulations, credit lines, and possible competition with their Turkish counterparts if and when a free trade pact between the two countries is signed.

“Fairer trade leads to growth and prosperity,” Bhattacharyya said in reply, adding that he looks towards “an optimal solution and good negotiations with Turkey” over free trade.

In closing remarks, Indian Consul General in Istanbul JP Singh said: “Across the [Turkish] party lines, there is a demand for more economic ties with India.”