Turkish economy back to normalization after US, Russia deal

Benefiting from military and diplomatic success in Syria, economy showing signs of returning to normal 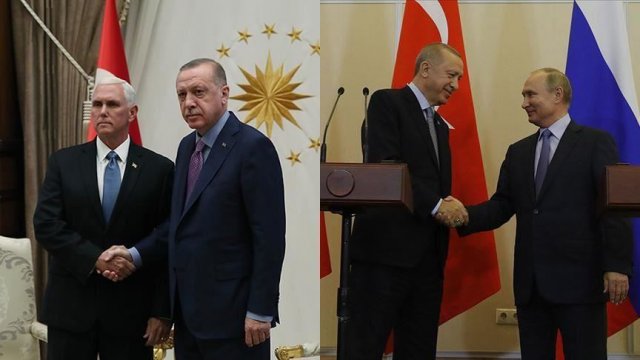 For a long time, Turkey has been exposed to problems due to an eight-year civil war in Syria and fighting terrorism, putting additional pressures on its economy. But for now at least, as the dust settles in the region, the economy is likely to see a less risky last quarter.

U.S. President Donald Trump said Wednesday he would lift sanctions on Turkey provided that a pause in hostilities along the Syrian border agreed to between Ankara and Moscow was made permanent.

Trump imposed the sanctions on Oct.14 following Turkey’s launch of anti-terror Operation Peace Spring, raising tariffs on Turkish steel back up to 50% and halting negotiations with Ankara on a $100 billion trade deal.

His move to lift sanctions comes a day after the agreement was struck between Turkey and Russia, pushing the YPG, the Syrian offshoot of the PKK terrorist organization, from a safe zone along the Syrian border and conducting joint patrols in the area.

Erhan Aslanoglu, a professor from Istanbul-based Piri Reis University, said with the diplomatic gains in Syria and Trump's decision to remove the sanctions, one could say Turkey is entering a period where external risks are relatively reduced.

He said Turkey, in terms of financial developments, is going back to the point where it was a month ago, adding the latest developments are creating a relatively positive atmosphere for the economy -- decreasing credit default swaps (CDS) -- a contract that allows an investor to "swap" or offset their credit risk with that of another investor.

Trump's decision will help the Turkish government reach the target set under its New Economic Program for 2020-2022, said Cuneyt Paksoy, a strategist and analyst.

He noted that good relations between Trump and Erdogan could be considered an anchor that maintains the balance in foreign exchange rates, easing unexpected shocks.

"Trump has been directly using his presidential power [against Turkey] and this sometimes results in asymmetric policies," he said, adding this time, everything is in favor of Turkey despite relations between the two countries being in a fragile balance.

Other aspects of Turkey’s economy such as a downward trend in inflation rates will also pave the way for the country’s economic bodies to rebalance the economy.

Bozkurt Aran, director of Turkish-based TEPAV Center for Multilateral Trade Studies, said the decision to lift sanctions signals the economy is returning to normal, having a positive impact on foreign trade and re-establishing a competitive environment.

In its more than 30-year terror campaign against Turkey, the PKK -- listed as a terrorist organization by Turkey, the U.S. and the European Union -- has been responsible for deaths of 40,000 people, including women, children and infants. The YPG is the Syrian offshoot of the PKK.

Turkey hosts some 3.6 million Syrian refugees, more than any other country in the world.

Syria has been locked in a vicious civil war since early 2011, when the Bashar al-Assad regime cracked down on pro-democracy protests with unexpected ferocity.