An Italian artist who recreated the photo of a 16-year-old Palestinian boy being arrested by Israeli troops has spoken of the need to show solidarity with Palestine. 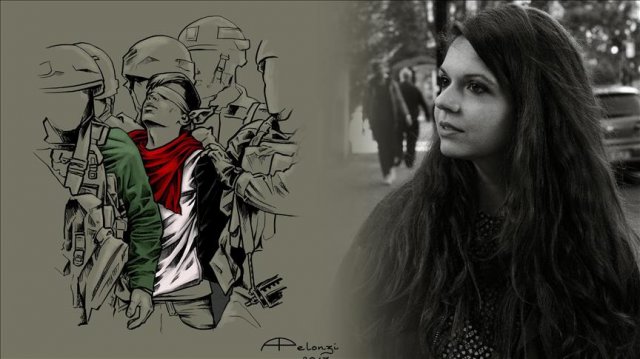 The photo of blindfolded Fawzi al-Junaidi being led away by more than a dozen heavily armed soldiers swept social media last week as users condemned Israel’s use of excessive force against children.

In Alessia Pelonzi's painting, the soldiers are reduced to little more than outlines while the observer’s eye is drawn to Fawzi, whose clothing and the sleeve of one soldier’s uniform are painted in the colors of the Palestinian flag.

“Solidarity is the most important thing in these dark times, and I believe it's one of the most powerful weapons against injustice,” Pelonzi told Anadolu Agency in an email response.

She added: “The soldiers are taking the kid but you can see the Palestinian flag in the drawing anyway. It’s something that can't be silenced. You can't sweep their identity as a people under the carpet.”

Fawzi has been accused of throwing stones at soldiers as protests broke out against the U.S. recognition of Jerusalem as Israel’s capital.

The photo was taken in the West Bank city of Hebron on Dec. 7 by Abed Al Hashlamoun.

“It impressed me so much that I decided almost immediately to draw something about it,” Pelonzi said.

“I felt the need, the urgency to communicate something with my art and the first thing I thought was ‘OK, I'm gonna put the Palestinian flag in the center of the picture’.”

‘Politicians to blame, not soldiers’

Pelonzi said she decided not to show the faces of the Israeli soldiers in her painting because “the politicians are to blame, not the soldiers”.

“And that's a major choice for me: the last thing I wanted to do is to blindly pin an accusation on someone. This is not my message, and it wouldn't help any right cause, in my opinion.

“The politicians are to blame, not the soldiers. The latest horrible decisions and the related violence, all came from the top. At least, this is my point of view.”

U.S. President Donald Trump’s announcement last week on Jerusalem was followed by unrest in which at least four Palestinians have been killed and nearly 1,800 injured.

“For me, it’s very important to show that, even from abroad, we can decide to be on the right side of this tragic fight, in order to end it as soon as possible and to guarantee the Palestinians the justice they deserve,” Pelonzi said.

She underlined that the situation in Palestine is something “we need to know better”.

“In Italy as well as in the rest of Europe, there is still a lot of misinformation on this subject.”

She also argued that artists should play a vital role on the Palestinian issue.

“I think that artists in general have a special attention to what's happening, since freedom is one of the basic principles of creating art. Having to testify [to] such a repeated violation of fundamental freedom and dignity, even from afar, is something that we can't and shouldn't remain indifferent to.

“I deeply admire the recent letter written by some artists -- not only from Europe -- like Tilda Swinton, Peter Gabriel, Mark Ruffalo, Aki Kaurismaki and Brian Eno: after the recent Donald Trump unilateral decision to recognize Jerusalem as Israel's capital, they are taking a stand against Israeli expansionism, trying to defend Palestinian rights. Those people are using their popularity and their influence as artists for a right cause, and that's a very good signal.”

‘Solidarity in these dark times’

The Italian artist criticized Trump for the Jerusalem decision and said that the America people at large should not be blamed for “the dumb choices of its president.”

“Of course, we all know Trump did something terrible, and I can barely imagine how angry the Palestinian people could be right now after his decision to recognize Jerusalem as Israel's capital; but for me is very important to show that, even from abroad, we can decide to be on the right side of this tragic fight, in order to end it as soon as possible and to guarantee the Palestinians the justice they deserve.

“I don't know how Europe will respond to Trump's move, but I know for sure that we can't blame a whole country for the dumb choices of its president. Trump is both a terrible politician and an awful human being; many Americans -- and, trust me, many Jews -- know it and are standing for the Palestinian rights.

“I'm happy to read so many messages of appreciation and thanks from Palestine: solidarity is the most important thing in these dark times, and I believe it's one of the most powerful weapons against injustice.”

She also praised photographer Wisam Hashlamoun, who shot the “wonderful photo that inspired me to create this drawing”.

“His work, as well as the work of many other photographers working in Hebron, Jerusalem, Gaza and the occupied territories, is a significant and brave testimony of what's happening not so far from Europe. Everybody should be informed about these events, because it's not just about Palestine: it's about the whole world, it's about human dignity and human rights…

“I think every artist should at least try to adopt it in order to communicate something and to contribute to make the world a better place. Every tragedy, every war, every injustice deserves to be represented; I'll keep trying to do my best to represent the beauty of the world as well as its suffering.”