Rock star Bono told U.S. lawmakers Tuesday it is imperative that foreign aid be seen as a vital “bulwark” against extremism and growing humanitarian crises. 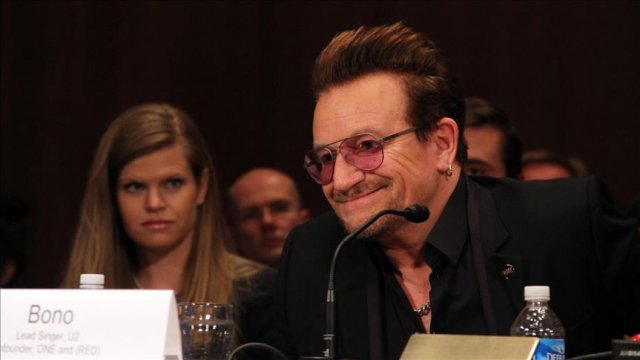 “Aid can no longer be seen as charity,“ the U2 front man said during testimony before a Senate subcommittee.

“When it is structured properly, with a focus on fighting poverty and improving governance to qualify for that aid, it could just be the best bulwark we have against the violent extremism that is gaining traction in the Levant and in the Sahel.”

The storied musician’s comments come as Europe and the Middle East continue to weather an ongoing refugee crisis fueled by conflicts in the Middle East, Africa and South Asia.

Syria, Afghanistan, Somalia, Sudan and South Sudan are the top five countries that refugees hail from, according to the UN’s refugee agency.

Five years of devastating conflict in Syria have resulted in the deaths of more than 250,000 victims and displaced millions more, forcing an unprecedented exodus of refugees to flow across the country’s borders with Lebanon, Turkey and Jordan.

Bono, who recently returned from a regional tour alongside subcommittee chairman Sen. Lindsey Graham and a delegation of U.S. lawmakers, said the ongoing migrant crisis is posing an “existential” problem for Europe.

“The integration of Europe, the very idea of European unity is at risk here,” he said, noting the rise of far-right groups who demur the flow of migrants across European borders.

He urged the U.S. to refrain from turning inward in the face of the crisis and to instead provide contingent aid to countries in need that require governments to commit to long-lasting structural reforms.

“The reforms necessary for the loans can be as important as the loans themselves,” said Bono, who is the co-founder of the anti-poverty 1 Campaign.

“People say that America is ready to close in on itself,” he said, “but America becomes America when it looks outward. When you’re a continent behaving like an island, you’re not America, it’s just not who you are."

In Africa's Sahel alone there is a troubling confluence of factors that Bono dubbed the "unholy trinity" facing the region: extreme ideology, extreme poverty and extreme climate.

"Those three extremes make one unholy trinity of an enemy and our foreign policy needs to face in that direction," he said. "It's even bigger than you think." The longer that politicians drag behind the realities facing them, the more expensive the bill to confront the problem becomes, he cautioned.

Nearly 175,00 migrants have arrived on the shores of Greece, Italy, Cyprus and Spain through April 11, 2016, while 723 migrants have died this year alone as they tried to reach Europe by sea.