Iran to return to Vienna nuclear talks in 'near future' 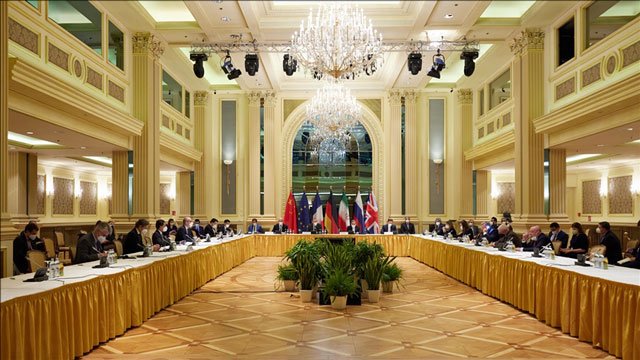 Iran is completing preparations to resume talks in Vienna on rejoining the Joint Comprehensive Plan of Action (JCPOA), also known as the Iran nuclear deal, in the "near future," the country's foreign minister said on Wednesday.

Speaking at a news conference in Moscow following a meeting with his Russian counterpart, Hossein Amir-Abdollahian, said the current Iranian cabinet is pragmatic and seeks results from the talks.

"The government of (President Ebrahim) Raisi is pragmatic, it is looking for results. We are waiting for the opposite side to show us their true intentions. The Islamic Republic (Iran) stands for logic, for dialogue, for negotiations, but negotiations that should lead to a result and ensure the rights of the people of Iran and have all parties returned to fulfilling their obligations.

"In the near future we will decide on the terms of the return to negotiations," said Abdollahian after his meeting with Russian Foreign Minister Sergey Lavrov.

Abdollahian claimed that he had received messages from the US side during his visit to New York last month for the UN General Assembly, adding that Washington was "serious" about restoring the nuclear accord.

He said that in response, he proposed that $10 billion of Iranian assets be unblocked in foreign banks. "Our understanding is that although Mr. Biden uses different rhetoric from Trump, he is guided by the Trump dossier," the minister said.

For his part, Lavrov said Russia's position was that the deal could be restored by implementing the original agreements based on the balance of interests as signed in 2015.

"The talks in Vienna should be resumed as soon as possible. At the same time, talks are not an end in themselves. The world community is waiting for the United States to return to the legal field of the deal and the cancellation of illegal restrictions both against Iran and its economic partners," he said.

Lavrov stressed that "attempts to link the restoration of the Iran nuclear deal with obtaining additional concessions from Iran are considered futile."

Delegations from the JCPOA's signatories, the UK, France, Germany, Russia, and China launched efforts in April to bring Tehran and Washington, which abandoned the deal in 2018, back into its fold.

After the June 18 election victory of Iranian President Ebrahim Raisi, these negotiations in Vienna were suspended.

In the talks, Iran demands that all Western sanctions be lifted, while its interlocutors seek to reinstate controls on its nuclear program.

Turning to bilateral relations, Abdollahian said Moscow and Tehran were in the process of planning the first meeting between Russian President Vladimir Putin and his recently elected Iranian counterpart Raisi.

"In the not-too-distant future, we hope that the presidents of our countries can hold a meeting in one of the capitals. Our agreement on this topic shows that our relations are strategic and privileged. We perceive Russia as a strategic partner of Iran, Russia occupies a priority place in our foreign policy, and we hope that we will soon see development in all directions," Abdollahian said.

Lavrov added that Moscow and Tehran signed a contract on supplying Russian-made Sputnik V coronavirus vaccines to Iran and are currently examining the possibilities of producing the jab in the country.

He welcomed the start of formal procedures on accepting Iran as a full member of the Shanghai Cooperation Organization (SCO), launched this year at the SCO summit in Tajikistan's capital Dushanbe, and said Iran discussed the agreement with the Eurasian Economic Union about the establishment of a free trade zone.