US, Russia also responsible for attacks by YPG/PKK on Turkey: Cavusoglu 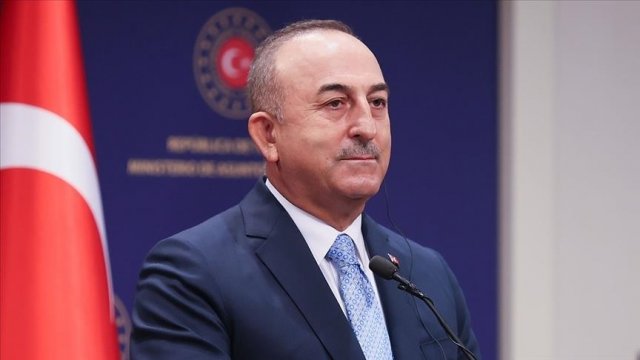 Turkish Foreign Minister Mevlut Cavusoglu on Wednesday said the PKK, and its Syrian offshoot YPG, are targeting Turkey and the government is not going to watch the developments as a mere spectator.

He made the remarks at a joint press conference in Turkey's capital Ankara with Denis Moncada Colindres, the minister of foreign affairs of Nicaragua.

“Turkey will do whatever it takes to eliminate terrorists from northern Syria,” Cavusoglu said, referring to the YPG/PKK, which repeatedly targets Turkish forces in the region.

The minister said the YPG/PKK has begun targeting Turkish territories just like it did before Ankara launched large-scale military operations in the region.

According to the minister, the average rocket-firing range of YPG/PKK toward Turkish territory is around 30 kilometers (18.6 miles).

Ankara, following military operations in Syria, reached agreements with Moscow and Washington who assured to push terror elements 30km back into the south, away from the Turkish borderline, he added.

“Russia and the US are also responsible for YPG/PKK attacks on Turkey as they have not fulfilled their promises,” the minister said.

"Now that they did not keep their word, the terrorists still have a presence there and have intensified attacks [on Turkey], what we need is to pull ourselves up by our bootstraps," the minister said, referring to Turkey's readiness to take initiative if need be, as seen in previous military campaigns in the region.

Cavusoglu also accused the US of being "insincere" in its condemnation of terror attacks on Turkish elements, noting that the US-supplied weapons to the terror group and trained its militants in the first place.

Since 2016, Turkey has launched a trio of successful anti-terror operations across its border in northern Syria to prevent the formation of a terror corridor and to enable the peaceful settlement of residents: Euphrates Shield (2016), Olive Branch (2018), and Peace Spring (2019).

In its more than 35-year terror campaign against Turkey, the PKK – listed as a terrorist organization by Turkey, the US, and EU – has been responsible for the deaths of at least 40,000 people, including women, children, and infants.