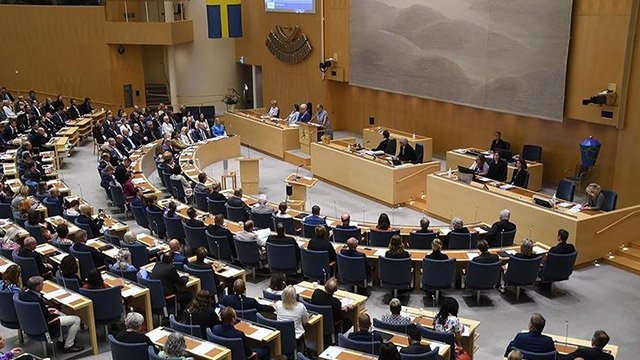 The leader of Sweden’s Left Party on Friday criticized a group of parliamentarians from the same party for posing with rags, which symbolizes the PKK terror group.

Nooshi Dadgostar told the Swedish daily Aftonbladet that she does not approve of the Left Party lawmakers' recent actions.

The statement came after lawmakers Daniel Riazat, Momodou Malcolm Jallow and Lorena Delgado Varas in July posed with rags, which represent the PKK/YPG terror outfit, and shared the images on social media.

"[This] is extremely inappropriate," Andersson told the country's TT news agency, noting that the PKK is a designated terror organization not just in Sweden, but throughout the EU.

"The PKK was branded a terrorist organization as early as 1984 by Olof Palme’s government. And with good reason. The PKK has many innocent human lives on its conscience," she stated on Twitter, tagging Justice Minister Morgan Johansson.

Johansson issued a similar warning to the Left Party on Twitter.

The move by left-wing parliamentarians came despite assurances in an agreement signed between Türkiye, Finland and Sweden to fully cooperate with Ankara in fighting terrorism.

Sweden and Finland formally applied to join NATO in May, a decision spurred by Russia's war on Ukraine.

However, Türkiye, a NATO member for more than 70 years, opposed the two countries' membership aspirations due to their tolerance and even backing for terrorist groups.

A trilateral agreement signed among the countries in June stipulates that Finland and Sweden will not provide support to the YPG/PYD, the PKK's Syrian offshoot, nor to the Fetullah Terrorist Organization (FETO) -- the group behind the 2016 defeated coup in Türkiye -- and said Ankara extends full support to Finland and Sweden against threats to their national security.

Following the agreement, the leaders of NATO's 30 members signed the countries' ascension protocols, a key step ahead of their formal entry into the alliance. The legislatures of all standing members, including Türkiye's parliament, must now ratify the bids before the process can conclude.

Turkish President Recep Tayyip Erdogan reiterated on Monday that Ankara will not take a positive attitude toward the membership bids unless Stockholm and Helsinki meet their promises to fight terrorism.

With the US action, 23 allies have now signed off on the countries' entry into NATO and Biden urged members who have not done so yet "to complete their own ratification processes as quickly as possible."