After 2-day SCO regional summit in Uzbekistan, Erdogan in US to attend 77th UN General Assembly 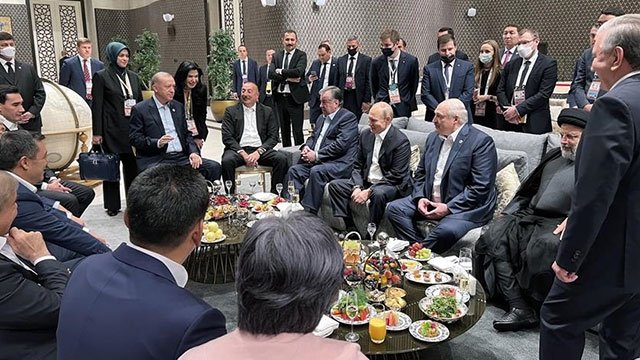 After attending a two-day regional summit and meeting world leaders in Samarkand, Uzbekistan, the Turkish president on Saturday reached New York to continue his diplomatic engagements.

Recep Tayyip Erdogan made a series of official contacts during the Shanghai Cooperation Organization (SCO) summit, which he attended as a special guest at the invitation of Uzbek President Shavkat Mirziyoyev.

Türkiye took part at the presidential level for the first time since getting the dialogue partner status in the organization in 2012.

Later in the day, he visited newly built areas of Samarkand along with other fellow leaders attending SCO.

Later, the Turkish president addressed the second session of the SCO summit, arguing that Türkiye's position serves as a bridge between the east and west, offering "unparalleled opportunities."

"With this understanding, we stand ready for cooperation in every area, from security, economy and energy to transportation, agriculture and tourism. We will continue to contribute to the ongoing political and economic processes within the Shanghai Cooperation Organization," he said.

During the talks, bilateral economic relations as well as regional issues, the Russia-Ukraine war and Türkiye's peace efforts were discussed.

Erdogan in US for UN General Assembly

In New York, Erdogan on Tuesday will address the General Assembly whose 77th session is being held under the theme, A Watershed Moment: Transformative Solutions to Interlocking Challenges.

He will meet UN Secretary-General Antonio Guterres and hold talks with heads of state and government on the sidelines of the session.

The Turkish president will likely receive representatives of US-based Turkish non-governmental organizations and Jewish groups, and attend an event organized by the Türkiye-US Business Council.

Erdogan is also expected to attend a reception by US President Joe Biden in honor of the heads of delegations.