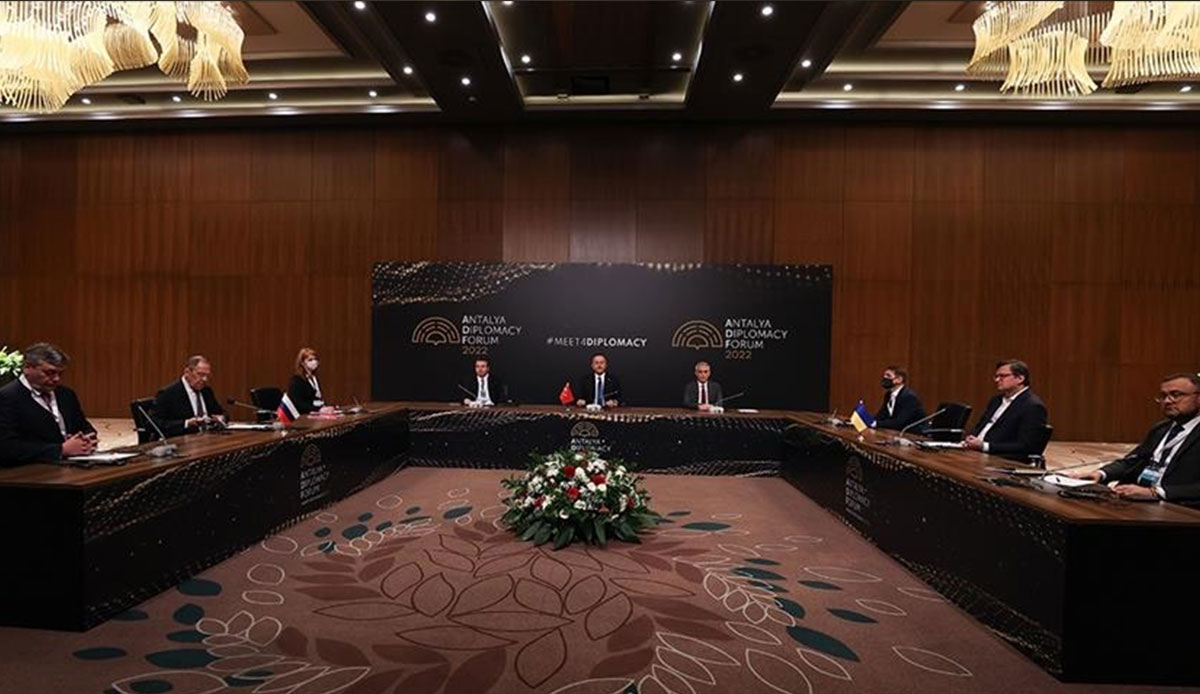 In March, US Deputy Secretary of State Wendy Sherman embarked on an overseas trip to Istanbul and the Turkish capital of Ankara. During her trip to the Turkish cities on March 4-5, she met with Turkish Deputy Foreign Minister Sedat Onal and other officials and discussed bilateral ties, regional developments and Russia's war on Ukraine.

On March 9, Israeli President Isaac Herzog paid a two-day visit to Ankara and met Turkish President Recep Tayyip Erdogan. The visit was seen as a step toward improving relations between the two countries.
In efforts to end the war in Ukraine and reach a lasting peace, Türkiye on March 10 convened a trilateral foreign ministers meeting and brought together for the first time since the start of the war Russia’s Sergey Lavrov and Ukraine’s

Dmytro Kuleba in the resort city of Antalya at the margin of the annual Antalya Diplomacy Forum. During the meeting, followed by nearly 400 local and foreign journalists, Türkiye emphasized the need to keep humanitarian corridors open.

The eighth Istanbul Mediation Conference was also held on the same day with the attendance of high-level representatives of international organizations, including the UN Secretary-General Antonio Guterres, who sent a video message.
Another significant meeting on March 10 was between Erdogan and his Azerbaijani counterpart Ilham Aliyev. During the meeting in Ankara, the two leaders discussed the latest situation in the Russia-Ukraine war, bilateral relations and the contribution of the cooperation of Türkiye and Azerbaijan to European energy security.

The Antalya Diplomacy Forum (ADF) was held on March 11-13 under the theme of Recoding Diplomacy. With participants from 75 countries in total, at least 17 heads of state and government, 80 ministers and 39 representatives of international organizations attended the forum.

On the sidelines of the forum, Erdogan held 11 bilateral meetings, while Cavusoglu held 67 meetings. Armenian Foreign Minister Ararat Mirzoyan also attended the forum and met with Cavusoglu. The two ministers reiterated their approach to the continuation of the process, which aims at full normalization and the establishment of good neighborly relations between their countries, without preconditions.

On March 13, the Turkish president had a meeting with Greek Prime Minister Kyriakos Mitsotakis in Istanbul in which increasing cooperation and focusing on the positive agenda was emphasized.
The UN chief was received by Erdogan on April 25.

Furthermore, Türkiye-Africa Media Summit was organized on May 25 by the Turkish Directorate of Communications. The event was attended by at least 80 media members, diplomats, academics, representatives from the private sector and non-governmental organizations from 45 African countries.

On July 22, Türkiye, the UN, Russia, and Ukraine signed a landmark agreement in Istanbul to resume grain exports from three Ukrainian Black Sea ports, which had been paused due to war. Days before its scheduled expiration, the landmark grain deal was extended for another 120 days, beginning on Nov. 19.

Many countries congratulated and appreciated Türkiye and the UN for the initiative. More than 14 million tons of grain have been carried by 556 ships via the Black Sea grain corridor. Additionally, Türkiye mediated an important prisoner swap between Ukraine and Russia. With the initiative of the Turkish president, a prisoner-of-war exchange was carried out between Russia and Ukraine in September.

On Aug. 6-12, the 13th Ambassadors Conference took place under the theme of Wise and Compassionate Turkish Diplomacy in 2023 and Beyond. Turkish ambassadors serving both at home and abroad exchanged views on regional and global issues closely related to Turkish foreign policy.

Among the attendees were foreign guests, including Secretary-General of the Organization for Security and Cooperation in Europe Helga Schmid, Azerbaijan’s Foreign Minister Ceyhun Bayramov, and Guatemala’s Foreign Minister Mario Adolfo Bucaro Flores.

The extraordinary meeting of foreign ministers of Organization of Turkic States (OTS) member states was held in Istanbul on Oct. 17. In addition to the priority issues on the agenda of OTS, the preparations for the OTS summit held in Samarkand on November 11 were discussed.

NATO Secretary General Jens Stoltenberg paid a visit to Türkiye on Nov. 3-5 and was received by Erdogan. He also met with Cavusoglu and Defense Minister Hulusi Akar and thanked Türkiye for its role in the resumption of the Black Sea grain initiative.

The TRT World Forum 2022, a two-day annual event, took place in Istanbul on Dec. 9-10. The gathering, which was held under the theme of Mapping the Future: Uncertainties, Realities and Opportunities this year, brought together academics, journalists, intellectuals, politicians, and members of civil society from around the globe.

Nearly 100 speakers and over 1,000 participants from nearly 40 countries attended the forum. Ukrainian President Volodymyr Zelenskyy also attended the event via video link. Zelenskyy expressed gratitude to Türkiye for its help in prisoner swaps with Russia.