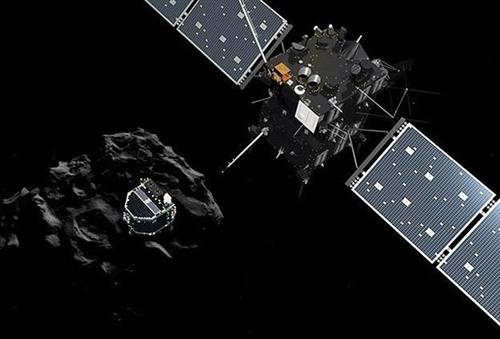 zoom in photo
Share Photo
Font Size:
A European spacecraft which made an historic landing on a fast-moving comet last year has woken up after spending seven months asleep.

"Hello Earth! Can you hear me? #WakeUpPhilae," the Philae lander tweeted on Sunday.

According to the European Space Agency (ESA), Philae 'spoke' for 85 seconds with its team on ground, via its mothership Rosetta  its first contact since going into hibernation last November.

"The signals were received at ESA's European Space Operations Centre in Darmstadt at 22:28 CEST on 13 June. More than 300 data packets have been analyzed by the teams at the Lander Control Center at the German Aerospace Center (DLR)," according to an official statement.

The probe landed on fast-moving 67P on 12 November 2014 before shutting down as its core battery ran out of energy; the crafts solar panels were unable to restore power.

Now the ESA has confirmed that the comet lander woke up and contacted Earth.

"Hello @Philae2014!!! Is that really you? So glad to hear from you, how are you?," read a tweet from the ESA's official account.

After the historic landing, Rosetta kept sending photos and data collected earlier from the comet.

"Philae is doing very well: It has an operating temperature of -35ºC [95F] and has 24 Watts available," said Philae project manager Dr. Stephan Ulamec in a statement.

"The lander is ready for operations," he added.

ESA scientist also said: "When analyzing the status data it became clear that Philae also must have been awake earlier. We have also received historical data - so far, however, the lander had not been able to contact us earlier."

For now, scientists are waiting for the next contact. Meanwhile, they will keep analyzing large data packets received from Philaes mass memory in order to understand "what happened to the lander in the past few days on Comet 67P/Churyumov-Gerasimenko."

The Rosetta probe was launched on March 2, 2004, from Kourou in French Guiana, and covered a distance of approximately 3.7 billion miles (six billion kilometers).

It chased Comet 67P/Churyumov-Gerasimenko around the solar system before finally reaching the giant lump of ice and dust on August 6, 2014.

Speaking in November last year, Matt Taylor, Rosetta project scientist, said: "Rosetta is trying to answer the very big questions about the history of our Solar System. What were the conditions like at its infancy and how did it evolve? What role did comets play in this evolution? How do comets work?"

The mission is scheduled to end in December 2015, when the comet heads out of the inner Solar System.

Rosetta will follow it throughout the remainder of 2015, as it heads away from the sun and its activity nears an end, according to the agency.

"The da­ta col­lect­ed by Phi­lae and Ro­set­ta is set to make this mis­sion a game-changer in cometary science," said Taylor.

Rosetta is the first spacecraft to rendezvous with and orbit a comet and has already returned critical scientific data.