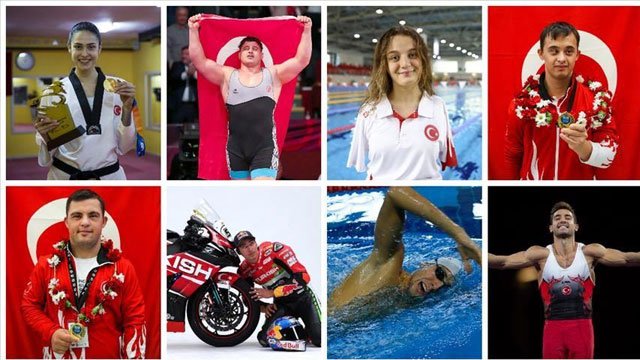 Turkish athletes left their marks in 2019 with outstanding achievements in international competitions.

A Turkish diver, Sahika Ercumen, became the first Turkish woman to dive without air tanks in Antarctica on Feb. 5.

The 34-year-old also set a world record in women's cave diving without fins on Oct. 28.

She became the first Turkish Paralympic swimmer to win silver medal in the world swimming championships.

Kayaalp also claimed a gold medal in the World Wrestling Championships in Nur-Sultan, Kazakhstan on Sept. 17.

He made history in the Kazakh capital as the 29-year-old wrestler was the first Turkish athlete to win four world championships in Greco-Roman style.

Irem Yaman of Turkey, 24, won a gold medal in women's 62-kg at World Taekwondo Championships in Manchester on May 19.

Beating her Brazilian opponent Caroline Santos 21-7 in the final match, Yaman protected her title as the world champion she won in 2015 and became the first Turkish female athlete to win the gold medal twice in taekwondo.

Yaman was a world champion in Russia 2015.

On Sept. 28, Toprak Razgatlioglu became the first-ever Turkish winner of the World Superbike Championship after stunning series leader Jonathan Rea by overtaking him in the final lap.

Colak finished the competition at first just 0.033 points ahead of Marco Lodadio from Italy.

The victory in Germany brought the Tokyo 2020 Olympic Games ticket to him.

On Oct. 22, Turkish weightlifter Muhammet Furkan Ozbek won a gold medal in the 2019 European Junior & Under 23 Championships in Romania.

Ozbek earned the gold in the snatch in the men's 73-kilogram weight class by lifting 148 kilograms.

He broke the European record twice in the clean and jerk by lifting 181 and 329 kilograms, respectively.

Ozbilen finished the race in second place, trailing only to Ethiopian debutant Kinde Atanew, who won in a course record of 2:03:51.

Turkish athlete Talha Ahmet Erdem won a gold medal in an international judo championship organized for sportspeople with down syndrome on Dec. 1.

Erdem has become the first Turkish athlete to have this honor.

Sakci finished men's 50-meter breaststroke in 25.82 seconds at the tournament in Glasgow, Scotland.

His record earned Sakci the title of first Turkish swimmer to earn a medal in the 50-meter breaststroke of the European Short Course Swimming Championships.