Over half a million people attend Teknofest Istanbul 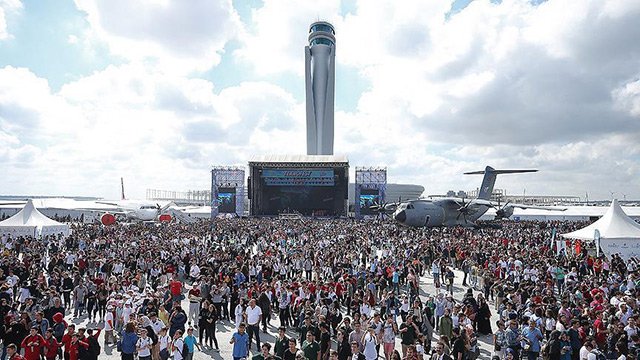 Over half a million people attended the four-day Teknofest Istanbul -- Turkey’s first aerospace and technology festival, the organizing committee said on Monday.

Teknofest Istanbul -- aimed to promote and showcase Turkey's rapid advance in technology -- was organized by the Turkey Technology Team Foundation (T3) and the Istanbul Metropolitan Municipality.

"More than half-a-million people visited the four-day Teknofest, conducted with the indigenous technological advance targets for the independent, prosperous and powerful future of Turkey," said Selcuk Bayraktar, the chairman of T3 Foundation.

Bakraktar noted that the locomotive industry of high technology is related to aviation and space.

Mehmet Fatih Kacir, the deputy minister of Industry and Technology and CEO of T3 Foundation, said the foundation wants the indigenous technological advance along with space, technology and science to come in the forefront agenda of Turkey.

Stressing the importance of Turkish history's biggest aerospace and technology festival, Kacir said: "We are a nation that rapidly adapts to innovations."

The festival -- kicked off on Thursday -- featured air shows, technology competitions, seminars on cutting-edge technology, and an international entrepreneurship summit, along with other activities.

As part of the four-day festival, leading Turkish defense and technology institutions and firms such as Aselsan, Baykar, IGA, Isbak, Roketsan, TAI, Turkish Airlines, TUBITAK, and TURKSAT had organized competitions in 12 different categories.

Anadolu Agency was the global communication partner of the festival, organized at the massive new Istanbul airport that is due to officially open next month.

The first phase of the new Istanbul airport is set to be completed on Oct. 29, according to Turkey's Transport and Infrastructure Minister Cahit Turhan.

Some 750 teams and over 2,000 competitors attended the technology competitions.