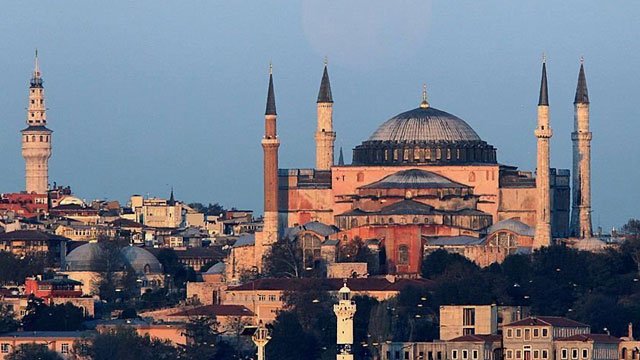 Turkey's decision to re-open Hagia Sophia as a mosque shows its ability "to assert its sovereignty and will”, said speakers at a virtual seminar on Saturday.

"Turkey has been siding with legitimate voices of the people and governments in the region," said Sami Al-Arian, an expert on global affairs.

Last week, a top Turkish court annulled the 1934 Cabinet decree, which turned Hagia Sophia to a museum, restoring its status as a mosque.

The architectural marvel in the heart of Istanbul was a church in the Byzantine era. It was converted into a mosque in 1453 after the Ottoman conquest of the city.

The discussion, The Hagia Sofia Decision and its Geo-political Implications, was hosted by Istanbul-based Center for Islam and Global Affairs (CIGA).

Al-Arian, director of the center, said: “Conversion of Hagia Sophia into a museum was about the evolution of a strong secular Turkish state and partly appeasement of the West.”

He noted 400 churches and synagogues have been restored in Turkey with support of the state.

“When the Spanish Inquisition happened towards the end of the 15th century, this is the hypocrisy we see today, that hundreds and hundreds of mosques and religious buildings [were converted] into Catholic churches and buildings and no one is talking about it,” said Al-Arian.

“Greece did not have a single mosque even though there were Muslims all through its history -- they [Greek Muslims] would be denied a single house of worship until recently.”

Yasin Aktay, a senior advisor to the Turkish government, said there was unanimous support to re-opening of Hagia Sophia for Muslim prayer.

“This shows how Hagia Sophia [had] a common value for people in Turkey,” said Aktay.

“We are now in a new Turkey… this decision is not against any religion and transforming Hagia Sophia [in 1934] was an exceptional one,” he said. “A museum is no way closer to a religious place but there are many common features between a church and a mosque.”

“There is no reason to worry about Hagia Sophia; all its historic and cultural aspects will be protected,” said Aktay, who is also a political scientist.

Aktay said during their conquests “Ottomans did not destroy any religious place… they could have converted all [non-Muslim] religious places into mosques, but they did not.”

Addressing his nation last week, Turkey's President Recep Tayyip Erdogan termed the move on Hagia Sophia as a "harbinger of the liberation of Al-Aqsa Mosque" in Jerusalem.

Referring to that, Al-Arian said Erdogan has been “at the forefront for the fight on Jerusalem and Palestine”.

"It has not just been supporting in words but all through its actions,” he said.

Al-Arian, who lived in the US for over four decades before moving to Turkey in 2015, said: “Hundreds of Catholic churches were closed in West; many were sold because nobody maintained them and [in many circumstances] it were Muslims who bought churches just to maintain them as houses of worship.”

Responding to criticism from some quarters in Muslim community in the West, Al-Arian said: “Post 9/11, many so-called Muslim leaders have turned their back on interests of Muslims in the West. They have been appealing to the most Islamophobic and anti-Muslim sentiments."

Ruling out any comparison with the Babri Mosque in India, Al-Arian said “the situations are completely different.”

“We are not talking about a group of people who have been persecuted, who have been targeted, kicked out and burnt like what happened in India,” he said, referring to the 16th century mosque in India which was demolished to build a Hindu temple in its place.

“Hagia Sophia was a mosque in 1934 and no question was asked when it was converted into a museum; there was no party that asked that they wanted to make it a church,” he said.