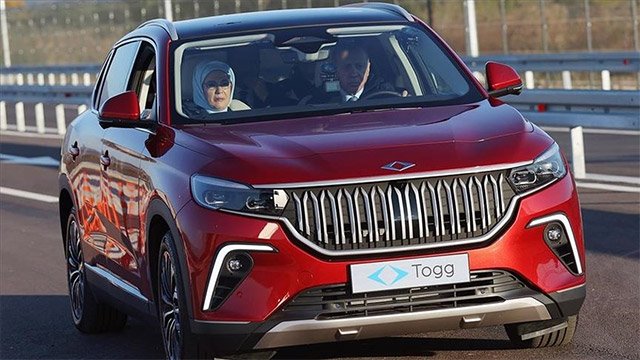 Turkish President Recep Tayyip Erdogan rolled out the country's first domestically-produced electric car C-SUV as the country celebrated the 99th anniversary of Republic Day on Saturday.  Attending the opening ceremony of the Togg Gemlik Campus in the northwestern province of Bursa, where the car will be mass-produced, Erdogan took a test drive.

"We are all witnessing the fulfillment of the 60-year-old dream," Erdogan said, adding "Togg is the name of the project that gives us all the pleasure of establishing this common dream for the strong future of our country."

Türkiye's first electric car Togg will hit the roads in the first quarter of 2023, he said, adding when Togg Gemlik Campus reaches full capacity, 175,000 vehicles will be produced annually and 4,300 people will be directly and 20,000 will be indirectly employed.

The president also said that the country has made a deal with one of the world's leading firms for the production of lithium-ion batteries for Togg in Türkiye.

"We will soon be laying the foundation of a battery factory which will be built on 609,000-square-meter (6.5-million-square-mile) land next to the Togg facility," he added.

Global companies have a great interest in Türkiye in terms of electric vehicle investments, Erdogan said, adding that with the support of the Industry and Technology Ministry, the country has been implementing a project that will install over 1,500 fast charging units in all 81 provinces of the country.

"We have issued electric vehicle charging station operating licenses to 54 companies. Togg, with its own brand Trugo, offers 1,000 fast chargers at more than 600 points in 81 provinces," he said.

The Turkish president said citizens will be able to pre-order Togg vehicles as of February 2023.

He also called on the managers of all state and private sector banks to facilitate people so that they can easily buy Togg. "Since we call this vehicle 'Türkiye's car', let's do what is necessary together."

"I hope Togg will take to the roads in many countries around the world as a prestigious Turkish brand in the upcoming period," he said.

"When Togg enters Europe's roads with all these models, what will they say? 'Turks are coming," the Turkish president said.

In June 2018, five industrial giants: the Anadolu Group, BMC, Kok Group, Turkcell, and Zorlu Holding as well as an umbrella organization, the Union of Chambers and Commodity Exchanges of Türkiye, joined hands to create TOGG.

TOGG will produce five different models – SUV, sedan, C-hatchback, B-SUV, and B-MPV – until 2030 and own their intellectual and industrial property rights.

In addition to engineering, design and production facilities, Europe's cleanest paint shop will also be located in the Gemlik Campus, where Turkish auto manufacturer Togg’s electric car will be mass-produced.

The car was designed by Italy’s Pininfarina design company, which has created models for Ferrari and California-based electric carmaker Karma.

Togg has chosen advanced lithium-ion battery technology company Farasis as its business partner for the battery. The vehicle is projected to reach 80% charge in under 30 minutes with fast charging.

The track tests showed it will take the car about 7.6 seconds to speed up from zero to 100 km/h with 200 horsepower, and under 4.8 seconds with a 400-horsepower engine.

The vehicle will be constantly connected to the internet via 4G and 5G.

Togg became the first Turkish brand to receive an iF Design Award in 2021, one of the most prestigious design awards in the world, with its C-SUV model.

The indigenous car will also be supported by the government with tax discounts and incentives.

At the ceremony, The Turkish president also signaled that Türkiye will continue to test more ballistic missiles, named the TAYFUN (Typhoon), developed by Roketsan, a state-owned defense giant.

"Has anyone seen our Atak and Gökbey helicopters, our TCG Anadolu warship, Hurkuş aircraft, our Akinci, Bayraktar, Anka unmanned aerial vehicles, and our Tayfun missile, here the missiles began to be fired. What did the Greeks begin to do soon after Türkiye test-fired Tayfun (Typhoon) ballistic missile? Tayfun immediately entered their agenda in television broadcasts and newspapers. Just wait, there will be more to come," he said.