Türkiye may appoint ambassador to Egypt in near future

With Türkiye and Egypt seeking to normalize ties, the Turkish foreign minister on Monday said his country may appoint an ambassador to Egypt in the upcoming months. Speaking to a group of reporters in Ankara, Mevlut Cavusoglu said: "Political consultations between deputy ministers could be rescheduled soon. An ambassador might be appointed in the coming months."

On NATO accession bids of Sweden and Finland, Cavusoglu said he will hold some bilateral meetings on the sidelines of Tuesday's NATO Foreign Ministers' meeting in the Romanian capital Bucharest. "We will meet with German Foreign Minister (Annalena) Baerbock and British Foreign Secretary (James) Cleverly. We will also meet with the Swedish and Finnish foreign ministers in Bucharest tomorrow in a tripartite format," Cavusoglu announced.

Sweden and Finland are yet to take "concrete steps" in under the trilateral memorandum, the Turkish minister said, noting that Sweden is the country that needs to take more steps. The trio signed a memorandum June 28 at the NATO summit in Madrid to address Ankara's legitimate security concerns, paving the way for NATO membership of Finland and Sweden.

The aim of the meeting was to ensure the implementation of commitments in the memorandum. Finland and Sweden extend their full support to Türkiye against threats to its national security, according to the memorandum. To that effect, Helsinki and Stockholm will not provide support to terror groups YPG/PYD and FETO.

Asked about the possibility of a process -- similar to Egypt -- with Syria, Cavusoglu stressed that Türkiye's main goal is to end the civil war in Syria. "We are continuing the process with the (Syrian) opposition. The opposition is also participating in the Astana talks along with the Assad regime," he said, adding that Türkiye aims to also "revive the political process, including the constitutional negotiations."

"This is part of the engagement. Progress must be made by the Constitutional Committee. But there is no progress there," he added. 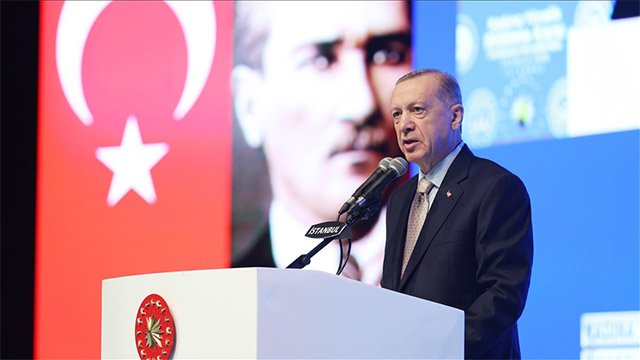 Türkiye slams int'l community over lack of reaction on latest terror attacks
If a terrorist group had murdered teachers, children anywhere else in the world, as the YPG/PKK did in Türkiye, it would’ve been talked about for months, says President Erdogan
Türkiye to continue fighting terrorism until threat over: President
Footage shows arrival of terrorist at Istanbul bombing scene
Türkiye vows to send grain, fertilizers to countries in need
Turkish president condemns 'vile, treacherous' attack in Somalia
Video News