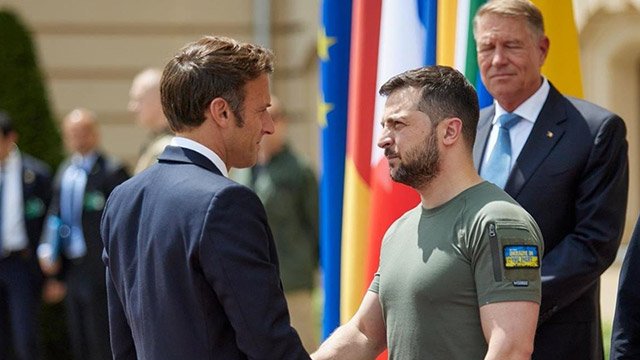 French President Emmanuel Macron on Thursday visited the devastated Ukrainian city of Irpin, a suburb of the capital Kyiv.

The trip is considered an overdue show of strength, according to some who have been critical of the leaders' lack of involvement in the embattled country which has been at war with Russia for over three months now.

The leaders of Europe’s three largest economies took an overnight train to get to the capital by this morning. On arrival, Macron issued a statement on behalf of the three leaders, saying: “This is a message of European unity addressed to Ukrainian men and women, of support."

Macron, Draghi, and Scholz arrived in Irpin around 10.30 a.m. local time (0730GMT). The town was heavily bombarded in the early stages of the Russia-Ukraine war that started on Feb. 24.

Macron praised the heroism of Ukrainians as they fought off the Russians from getting too close to the capital.

“It’s here, among other places, that the Ukrainians stopped the Russian army descending onto Kyiv. It represents the heroism of the army, but also of the Ukrainian population. And alongside that, you have traces of barbarism.”

The three European leaders' visit comes the day after US President Joe Biden announced an additional arms package of $1 billion in military assistance to Ukraine.

More than 4,452 civilians have been killed in Ukraine since Russia launched a war on Ukraine on Feb. 24.

Over 14 million people have been forced to flee their homes, including more than 7.5 million that have fled to other countries, according to UN figures.