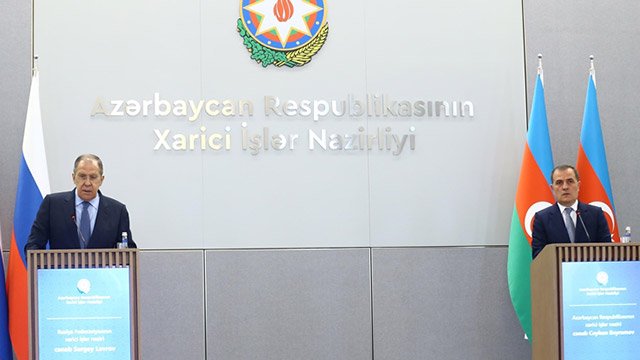 The EU and NATO are gathering a coalition for war with Moscow, Russian Foreign Minister Sergey Lavrov said on Friday, commenting on the granting of EU candidacy status to Ukraine and Moldova.

Speaking at a news conference in Baku following a meeting with his Azerbaijani counterpart Jeyhun Bayramov, Lavrov said the situation reminds the state of affairs before World War II when Hitler united most of the European countries for a war against the Soviet Union.

"When the Second World War was about to start, Hitler gathered most of the European countries under his banners. Now the EU and NATO are also gathering the same modern coalition for the fight, and by and large, for war with the Russian Federation. We will look at all this very carefully," he said.

Lavrov then announced the second bilateral meeting on the border delimitation between Armenia and Azerbaijan, which will take place in Moscow.

Both sides confirmed their willingness to work on the issue, considering it very significant for the current stage of the settlement, he noted.

"This meeting was agreed (to take place) in Moscow, and we are currently selecting dates that would be convenient for both sides," he said.

Lavrov also reiterated Russia's readiness to contribute to signing a peace treaty between Baku and Yerevan and supported the idea of cooperation in a 3+3 format in the South Caucasus, comprising Armenia, Azerbaijan, and Georgia and their three "neighbors” -- Russia, Türkiye, and Iran.

Asked about granting Ukraine and Moldova a candidate status to the EU, Lavrov said that, unlike NATO, the EU is not a military organization and so membership in this structure does not pose threats to Russia.

But Lavrov also noted that Moscow has been following the steps of the EU and doubts that the bloc's "Russophobic policy" will soon dissipate.

For his part, Bayramov said Baku's priority is normalization and the long-term peace in the region, and this process cannot be "held hostage" to the Organization for Security and Co-operation in Europe (OSCE) Minsk Group on Karabakh, which does not currently exist.

The Minsk Group, a body under the OSCE was tasked around three decades ago to solve the Karabakh dispute, but it had achieved no results in nearly three decades, he stressed.

The OSCE Minsk Group, co-chaired by France, Russia, and the US, was formed on March 24, 1992 to find a peaceful solution to the conflict, but to no avail. The co-chairs of the Minsk Group, who visited both countries periodically and met with the authorities, did nothing more than issuing warnings to the parties to abide by the cease-fire each time.