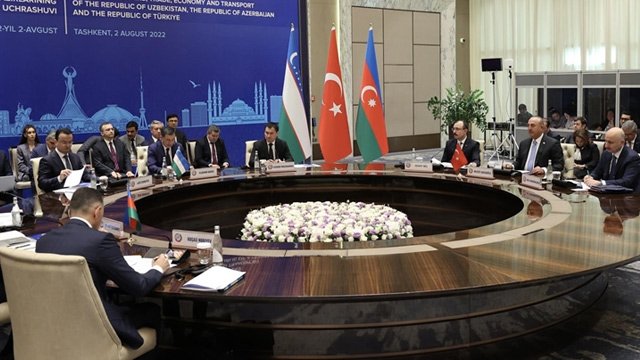 Türkiye's foreign minister on Tuesday said Russia's war in Ukraine has exposed the fragility of the food distribution system.

"The war in Ukraine tops the challenges we face today," said Mevlut Cavusoglu at the Türkiye-Uzbekistan-Azerbaijan trilateral meeting for the ministers of foreign affairs, trade and transport.

The war reminds us all of "the importance of sustainable and safe transportation lines," Cavusoglu said at the meeting held in the Uzbek capital Tashkent.

"It showed us how important it is to diversify routes and sources of energy. The war also revealed the fragility of the global system on food and energy security," he added.

Many least developed countries are facing a hunger crisis due to the war, the foreign minister said.

Citing the Türkiye-brokered deal between Russia and Ukraine, Cavusoglu said "on the day the agreement was signed, there was a 5% decrease in the global grain prices."

Türkiye, the UN, Russia, and Ukraine signed the deal on July 22 to reopen three Ukrainian ports – Odesa, Chernomorsk, and Yuzhny – for grain that has been stuck for months because of the ongoing Russia-Ukraine war, which is now in its sixth month.

The deal came after a general agreement was reached between the parties on a UN-led plan during talks in Istanbul on July 13 to form a coordination center to carry out joint inspections at the entrance and exit of the harbors and to ensure the safety of the routes.

After departing from the Ukrainian port of Odesa, the first grain-loaded ship will anchor off the coast of Istanbul on Tuesday for a joint inspection before setting off for Lebanon, according to the Turkish National Defense Ministry.

Loaded with corn, the Sierra Leone-flagged dry cargo ship Razoni is on course for its final destination of the port of Tripoli in northern Lebanon.

Cavusoglu also noted all regional developments unfolding and affecting many, the military and political rivalry among the global powers caused "a new Cold War environment."

Cavusoglu said the pressure of illegal migration triggered by conflicts and economic crises is a global challenge, as he further stressed that the effects of climate change, and the energy and food crises are felt by all.

"This crisis environment offers opportunities as well as risks. Despite the deepening great power rivalry, Eurasia and the historical Silk Road are again becoming a central trade route," he added.

Emphasizing that the world's largest trade volume is between Europe and Asia, Cavusoglu said the countries at the center of this trade route should manage this wealth.

"Reviving the Silk Road, which is the most important trade route of the ancient world, will further harmonize the Turkic world," he said.

On relations between Türkiye, Uzbekistan and Azerbaijan, Cavusoglu said the three countries share characteristics which are crucial for strong regional integration.

He added that the "historical ties, closeness of our peoples and strong political will are among these (characteristics)."

Citing the Organization of Turkic States becoming an international entity following the Istanbul Summit last year, Turkish Foreign Minister Cavusoglu voiced willingness to open a "new page" during the organization's summit that is to be held in Uzbekistan's Samarkand city in November 2022.

On the 30th anniversary of their independence, Cavusoglu said Türkiye's relations with Azerbaijan and Uzbekistan are beyond the level of strategic partnership.

In a tweet, the top diplomat announced the signing of the Tashkent Declaration "which will increase the welfare of the Turkic world and strengthen our relations."

"We will make this mechanism permanent and realize concrete projects," Cavusoglu said.

For his part, Turkish Transport and Infrastructure Minister Adil Karaismailoglu recommended "to take steps toward liberalizing bilateral and transit transportation and removing tolls in order to develop international trade and grow our economies."

"We are getting wonderful results with the countries we liberalized transport with. We want to experience the same ease and efficiency with you," Karaismailoglu said.

Later in a tweet, Cavusoglu said they "discussed our strategic relations, which we have strengthened with a common will and vision, & regional issues."