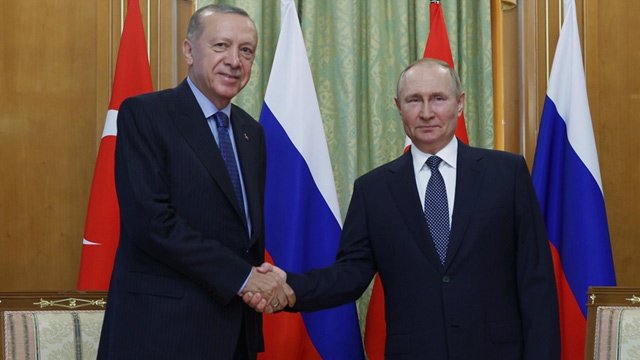 Talks between Ankara and Moscow on developments in Syria will "bring relief to the region," the president of Türkiye said on Friday.

"I believe that our handling of the developments in Syria on this occasion will also bring relief to the region," Recep Tayyip Erdogan said ahead of a bilateral meeting with his Russian counterpart Vladimir Putin in the Russian coastal city of Sochi.

He underlined that the meeting would be "very important" for putting forward the role played by Türkiye and Russia in the region.

Erdogan also said Türkiye values cooperation with Russia in the fight against terrorism, adding that the eyes of the world are on Sochi.

According to the Turkish Presidency, Erdogan and Putin will discuss regional and international issues, as well as relations between Türkiye and Russia.

The leaders will hold a one-on-one meeting and then chair talks between delegations.

On the Akkuyu Nuclear Power Plant, a joint project of Ankara and Moscow, Erdogan stressed the project’s importance, ruling out any postponement.

"Because it’s very important that the agreed-on calendar works and that Akkuyu is completed at the specified time. Because Akkuyu Power Plant will handle 10% of Türkiye's energy potential in energy supply, and I believe it would be beneficial for us to have a detailed discussion of this issue," he added.

Akkuyu has an operational date set for the first reactor by 2023, with the entire plant set to be up and running by 2025.

The project started with a 2010 intergovernmental agreement between Türkiye and Russia.

'EUROPEAN STATES SHOULD BE GRATEFUL TO TÜRKİYE'

Putin praised Erdogan for his role in signing a historic deal to unblock grain exports, which also includes deliveries of Russian foodstuff and fertilizers.

On July 22 Türkiye, the UN, Russia, and Ukraine signed a historic deal to reopen three Ukrainian ports for exports of Ukraine grain, which had been stuck for months due to the Russia-Ukraine war.

Turning to natural gas, Putin said: "TurkStream, whose construction we completed some time ago, is one of the most important arteries for supplying Europe with Russian gas."

He stressed that TurkStream is "running smoothly," adding that the European countries should be grateful to be able to buy Russian gas via Turkish Stream.

The 930-kilometer (578-mile) pipeline will transport Russian gas under the Black Sea through Bulgaria, Serbia, and Hungary, with another section reaching Türkiye.

With a capacity of 31.5 billion cubic meters (1.1 trillion cubic feet) per year, the project is the world's largest-diameter offshore gas pipeline installed at such depths.

Noting that Russia has many strategic projects being carried out together with Türkiye, Putin said Moscow hopes to boost its trade volume with Türkiye.

Putin also expressed hope that a memorandum on developing trade and economic ties would be signed during the meeting.