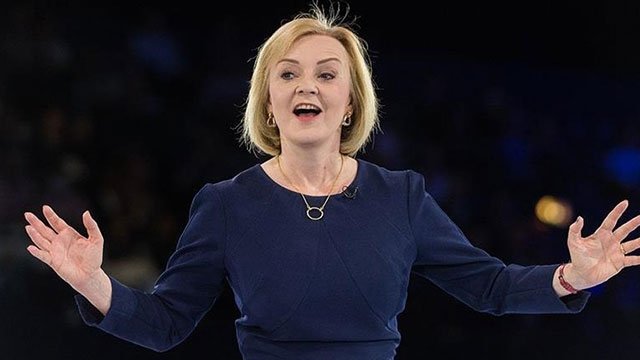 Truss will replace Boris Johnson as the country’s new prime minister and she is to become the third female prime minister of the UK after Margaret Thatcher and Theresa May.

Truss is expected to receive the duty of forming a new government from Queen Elizabeth II on Tuesday.

In her victory speech, Truss thanked her supporters as well as her rival Sunak, saying the campaign showed the “breadth and depth of talent in the Conservative Party.”

She then paid tribute to the outgoing premier, “my friend Boris Johnson,” who was pressured out of the leadership amid a series of scandals.

“Boris, you got Brexit done. You crushed (former Labour Party leader) Jeremy Corbyn, you rolled out the (COVID-19) vaccine. And you stood up to (Russian President) Vladimir Putin. You were admired from Kyiv to Carlisle,” she said.

She then turned her attention to her party, saying: “Friends and colleagues, thank you for putting your faith in me to lead our great Conservative Party, the greatest political party on Earth.”

“During this leadership campaign, I campaigned as a Conservative and I will govern as a conservative,” Truss said, before listing her priorities.

“I will deliver a bold plan to cut taxes and grow our economy,” she said.

The expected date of the next British general election is sometime in 2024.

In a statement, Johnson said: "I have been proud to serve as leader of the Conservative Party for the last three years, winning the biggest majority for decades, getting Brexit done, overseeing the fastest vaccine rollout in Europe and giving vital support to Ukraine.

"Congratulations to Liz Truss on her decisive win. I know she has the right plan to tackle the cost of living crisis, unite our party and continue the great work of uniting and levelling up our country. Now is the time for all Conservatives to get behind her 100 per cent."

Johnson’s predecessor Theresa May tweeted: “Congratulation Liz Truss. We Conservatives must now work together to address the challenges facing our country. Tackling the cost of living, delivering for those in need & managing the public finances responsibly. I look forward to supporting the government in that task.”

May’s predecessor David Cameron also tweeted: “Many congratulations to new PM Liz Truss. At this time of challenge & global uncertainty, I wish the new government well. I never forget the support I had from all former Conservative leaders when I won the ballot in 2005 & I hope all Conservatives will unite behind the new PM.”

As for Sunak, he echoed the prevailing sentiment within the party of closing ranks behind the new leader.

“Thank you to everyone who voted for me in this campaign. I’ve said throughout that the Conservatives are one family. It’s right we now unite behind the new PM, Liz Truss, as she steers the country through difficult times,” he tweeted.

Then came the opposition’s turn to weigh in with their views on the new prime minister.

He told local reporters that while Truss spoke at length about tax cuts, she did not speak as much about the cost of living crisis.

Later, Starmer tweeted: “I'd like to congratulate our next Prime Minister Liz Truss as she prepares for office. But after 12 years of the Tories (Conservatives) all we have to show for it is low wages, high prices, and a Tory cost of living crisis. Only Labour can deliver the fresh start our country needs.”

Ed Davey, leader of the small centrist Liberal Democrats, said: "Under Liz Truss, we're set to see more of the same crisis and chaos as under Boris Johnson. From the cost of living emergency to the NHS crisis, the Conservatives have shown they don't care, and have no plan."
Northern Ireland, Scotland

Sir Jeffrey Donaldson, leader of the pro-union Democratic Unionist Party in Northern Ireland, used his statement congratulating Truss to press home unionist demands over the Northern Ireland protocol, a section of the UK-EU Brexit deal they oppose as they believe it undermines their place in the UK.

“We congratulate Liz Truss on this achievement. We have already requested an early meeting with the new Prime Minister to address the challenges in Northern Ireland both with the Protocol and our approach to energy and food security,” Donaldson said.

“To address the cost-of-living crisis in Northern Ireland, the Government must replace the Northern Ireland Protocol with arrangements which restore our place in the United Kingdom.”

The Scottish National Party, which is pushing for a second Scottish independence referendum to secede from the UK, said Truss was on course to be “even worse than Boris Johnson.”

Scottish First Minister and SNP leader Nicola Sturgeon tweeted: “Congratulations to Liz Truss. Our political differences are deep, but I will seek to build a good working relationship with her as I did with last 3 PMs. She must now freeze energy bills for people & businesses, deliver more cash support, and increase funding for public services.”