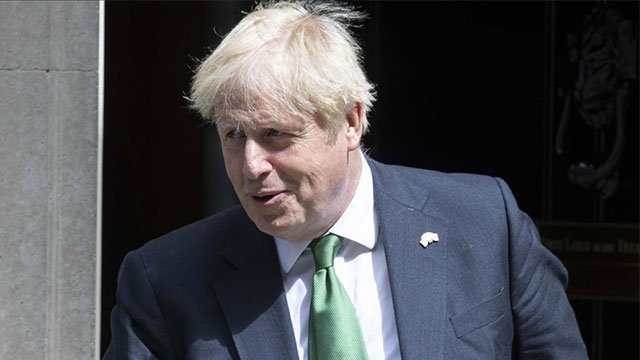 Former British Prime Minister Boris Johnson arrived back in the UK on Saturday amid mounting speculation he will enter the Conservative leadership race to become premier again. Johnson was on holiday in the Dominican Republic despite parliament being in session. Local media reported that he told allies he wants to run for the leadership. The move, yet to be officially confirmed, has exposed sharp divisions within the ruling Conservative Party, with some MPs – including several former and current Cabinet ministers – enthusiastically encouraging him to run, and other threatening to quit the party altogether if he does so.

Johnson was ousted by his MPs just six weeks ago following a series of scandals, including being found guilty of breaking his own COVID-19 lockdown rules. New party rules mean any potential candidate will need at least 100 nominations from fellow MPs by 2 p.m. Monday to advance in the leadership race, meaning the maximum number of candidates is capped at three.

Rishi Sunak, Johnson’s former Treasury chief, is the other speculated main contender, but is yet to officially announce his candidacy either. Sunak also has the support of many MPs, including senior figures, but is loathed by backers of Johnson and blamed for his downfall, despite the Conservative parliamentary party as a whole moving against him.

Johnson is more popular with the party base than with his fellow MPs, and Sunak vice versa. Sources from both Johnson and Sunak’s campaigns have told local media that both have surpassed the 100 MP target. The third candidate is the only one to have officially announced her leadership bid thus far, and this is Penny Mordaunt, currently the leader of the House of Commons, Britain’s lower house of parliament. According to local media reports, however, she is struggling to reach the 100 MP threshold, with Johnson and Sunak dominating the race, despite neither having officially announced their candidacies yet.

She ran in the last leadership election that saw the outgoing Liz Truss become prime minister. Mordaunt came third in that contest. Truss resigned on Thursday after just 44 days in office, making her the shortest-serving British premier in history.