Sunak is the 1st British Asian prime minister of the country 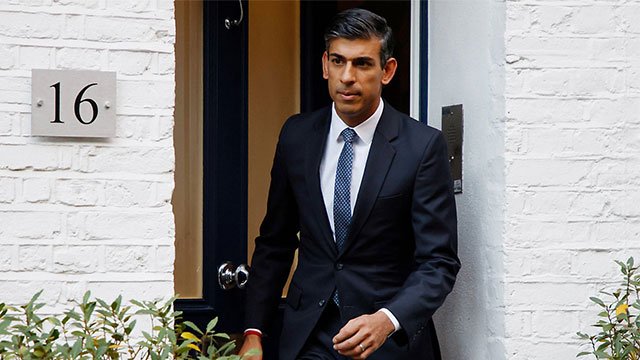 Former Chancellor Rishi Sunak became the UK’s first British Asian new prime minister on Monday as the new Tory leader, after Penny Mordaunt dropped out of the race minutes before the candidacy deadline was reached.

Sir Graham Brady, the 1922 Committee head, confirmed in a short statement that Sunak became the new leader. He announced that the committee had received only one application, which was from Sunak.

Sunak, 42, was the chancellor of the exchequer – top ministerial position for the UK’s finance affairs – in Boris Johnson’s Cabinet in 2020.

The new prime minister was born in Southampton to Indian parents who came to the UK from East Africa. His father was a doctor and his mother owned a chemist shop.

Sunak is married with two children.

In his time as the finance minister during the COVID-19 pandemic, Sunak devised and implemented a wide-ranging economic support program for the country that ran into the hundreds of billions of pounds, supporting both employers and employees with generous government funding.

The Tory leadership contest was triggered after outgoing Prime Minister Liz Truss’ resignation last Thursday after only six weeks in the top government office, following a tumultuous run and turmoil in economy due to her mini-budget.

Mordaunt’s statement of pulling out of the race came a few minutes before the deadline was reached.

"Our Party is our membership. Whether we are elected representatives, activists, fundraisers or supporters. We all have a stake in who our leader is,” Mordaunt wrote on Twitter.

She noted: "These are unprecedented times. Despite the compressed timetable for the leadership contest it is clear that colleagues feel we need certainty today. They have taken this decision in good faith for the good of the country.

"Members should know that this proposition has been fairly and thoroughly tested by the agreed 1922 process.”

Her statement further read: "As a result, we have now chosen our next Prime Minister. This decision is an historic one and shows, once again, the diversity and talent of our party. Rishi has my full support.

"I am proud of the campaign we ran and grateful to all those, across all sides of our party, who gave me their backing. We all owe it to the country, to each other and to Rishi to unite and work together for the good of the nation. There is much work to be done."