Imran Khan taken to hospital after bullets hit his legs during rally in Punjab province; one dead, 6 injured 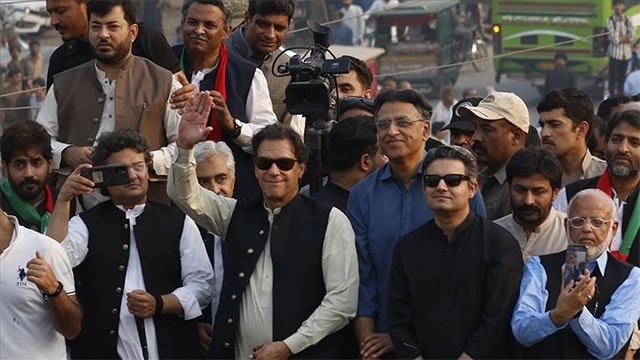 Pakistan’s former Prime Minister Imran Khan was injured in firing during his long march in the Wazirabad area of southeastern Punjab province on Thursday.

According to local media, unidentified assailants opened fire on Khan’s vehicle near the Allah Ho Chowk in Wazirabad.

“Thanks to Allah as Khan is safe,” she added.

She also confirmed that one person has been killed and six others, including PTI Senator Faisal Javed, have been wounded.

“Imran Khan has been shifted to Lahore and his condition is out of danger," said Asad Umar, a former federal minister and PTI’s secretary-general.

Video footage aired on a local TV channel showed a young man with a revolver firing at Khan's container. However, his attempt was foiled by another person when he grabbed his hand to snatch the revolver and the attacker failed to target Khan.

Rashid also confirmed that police have arrested the attacker.

Meanwhile, PTI leader Fawad Chaudhry called the firing “a targeted attack” on Khan and warned: “We will take revenge.”

“We are peaceful people but today they attacked us and we will take revenge,” Chaudhry told the long march’s participants.

Condemning Interior Minister Rana Sanaullah, Shireen Mazari, another PTI leader, tweeted after the attack: “Rana Sana threatened to murder IK (Imran Khan) & today we saw him attempt that. He should be arrested on attempted murder as his public statement bears witness to same.”

Former federal minister and close aid of Khan, Murad Saeed, also condemned the attack on the PTI chief and tweeted: “Our red line has been crossed! You were warned!”

Imran Khan kicked off a "long march" from Lahore to the capital Islamabad on Friday in an attempt to press the government for snap elections.