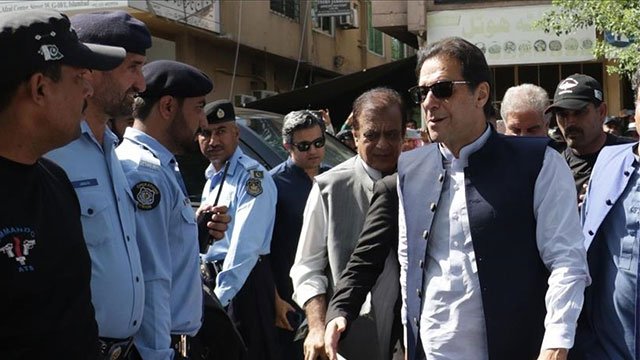 Pakistan's former Prime Minister Imran Khan said his anti-government march on the capital Islamabad will be resumed on Tuesday from the same point where he was attacked and wounded on Thursday.

Addressing a press conference on Sunday at Shaukat Khanum Hospital in the northeastern city of Lahore where he is being treated, Khan said the march will take another "10 to 14" days to reach the garrison city of Rawalpindi, which borders Islamabad, where he himself will join the marchers to move towards the capital.

Khan had called off the "long march" on Thursday following a failed assassination attempt on him in the Wazirabad district of northeastern Punjab province, governed by his center-right Pakistan Tehreek-e-Insaf (PTI) party.

He was wounded in the leg when shots were fired at him and other officials standing on the top of a modified container truck.

At least one person was killed and over a dozen others, including two lawmakers, were injured in the attack, which sparked widespread protests and condemnations from across the globe.

“A sea of people from across the country will throng Rawalpindi,” Khan, donned in a blue hospital gown and slumped into a chair, said, adding: “Until then, I will be addressing the march daily from here (hospital).”

Khan moved to his house in Zaman Park, Lahore after being discharged from the hospital, Geo News reported.

He welcomed the formation of a Supreme Court Commission proposed by Prime Minister Shehbaz Sharif to investigate the botched assassination attempt, a demand the ex-premier has made time and again.

However, he insisted, that a "free and fair" investigation is not possible until Sharif, Interior Minister Rana Sanaullah, and a top intelligence official, whom he has accused of being involved in the assassination attempt, resign.

The government and the country's powerful army have denied the allegations.

“I welcome this (proposal) but my first point is that would it work? When all the agencies come under the three people I’ve named, who will investigate?” he contended.

“Allah has given me a new life. I assure you that I will continue my fight ... get ready for my call,” he said.

Khan kicked off the "long march" on Oct. 28 in an attempt to press the government for snap elections.

Sharif's government says there would be no early vote, and the next elections will be held as scheduled, in late 2023.

Khan was deposed as prime minister in April after a no-confidence motion was passed in parliament.

He blames his unceremonious ouster on a US-backed conspiracy, an allegation that Islamabad and Washington have repeatedly refuted.

Khan, who became the country's 19th prime minister in August 2018, ruled for just over three and a half years.