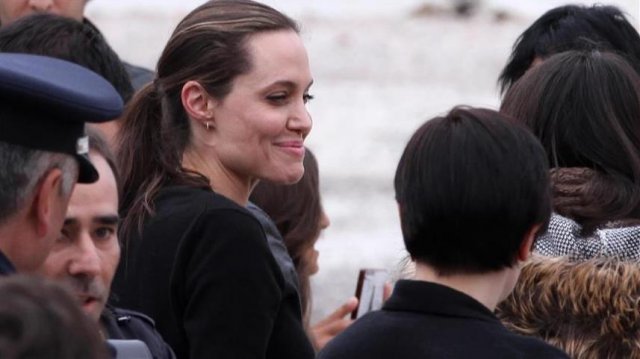 "I do not believe that the refugees' drama will end soon," Jolie said after leaving a local government building in Mytilene.

Jolie met NGOs and was briefed on refugee issues, promising that she would return to the island for holidays with her family in the summer.

The UN Goodwill Ambassador has spent two days in Greece, starting in Athens on Wednesday where she was received by Prime Minister Alexis Tsipras.

Jolie also visited Piraeus port in the capital where at least 4,000 refugees are living before moving to accommodation camps throughout Greece.

The Hollywood activist is not the first celebrity to visit Lesvos trying to raise awareness of the refugee crisis.

Actor Susan Sarandon also visited the island in late December and joined efforts of local and foreign volunteers in receiving refugees coming from the Turkish coast.

Chinese artist Ai Weiwei has set up a studio on the Greek island to highlight the plight of refugees and is currently at the northern border, at the transit camp of Idomeni.

A global campaign on social media is calling for the eastern Aegean islands to be awarded the Nobel Peace Prize for their contribution to the refugee crisis.

Out of almost a million migrants and refugees who arrived in Europe in 2015, almost 500,000 entered through Lesvos, according to the United Nations Refugee Agency.