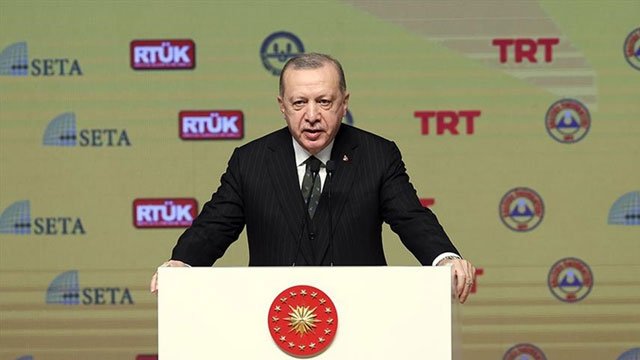 Countries exposed to Islamophobia should establish a strong communication network in the international arena, Turkey's president said on Tuesday.

"We need to mobilize conscientious politicians, intellectuals, media members, clergy, including our own clergy, all over the world against the disease of Islamophobia." Recep Tayyip Erdogan said at the first International Media and Islamophobia Symposium in Ankara."

Efforts to prevent Islamophobia, which plays an important role in peace and security for humanity, should be carried out through common sense mechanisms that will be set up, said Erdogan.

He added that when the Islamic world establishes unity among itself, it is possible to make progress against the struggle against Islamophobia in a short time.

Erdogan stressed that Islamophobia is like cancer spreading rapidly in many parts of the world, especially in the West.

The strategy of "demonizing Muslims" initiated by the American administration after the 9/11 terror attacks had a function that triggered the "virus of Islamophobia" that already existed in the cultural structure of many societies, he said.

Instead of discussing the dimensions of the Western threat, those who fall under the influence of racist and discriminatory trends take the easy way out, he underlined.

Underlining that Western countries try to avoid the uncertainties caused by the changing global power balances by distracting their public opinion with fascist rhetoric, he said marginal racist movements have now been placed in the center of Western politics.

"Those who have placed themselves in a distinguished position in the world as the stronghold of religious freedom for a long time have competed in banning all symbols of Muslims today," he added.

Referring to the rising Islamophobic attacks, he said Western authorities responsible for ensuring the safety of all citizens, especially the political parties and the police organizations, are in the race against Islam.

"These orientations of politics and public institutions lead to the development of an unfounded prejudice against Islam and Muslims among democratic people living in Western countries," he said, adding that prosperity cannot survive for a long time where freedoms have disappeared.

The two-day symposium takes place at the ATO Congresium, an international convention and exhibition center.