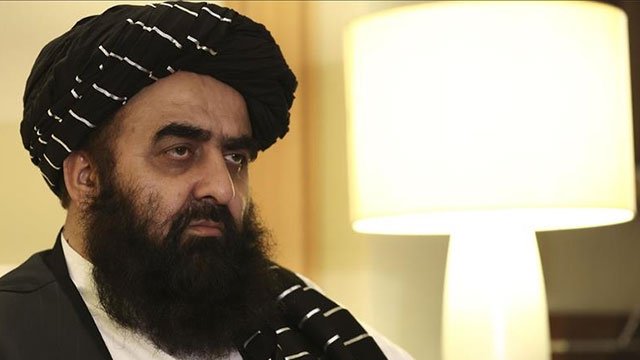 A top Taliban official on Friday dismissed the idea of integrating opposition leaders in the interim Afghanistan administration, stressing that no state has the authority to force them to accept former governments' representatives into the governance system.

Acting Afghan Foreign Minister Amir Khan Muttaqi made the remarks at a program hosted by Islamabad-based Pakistani think tank, the Institute of Strategic Studies Islamabad, where he was a guest speaker.

The Taliban already have constituted an inclusive government that included representatives from all ethnic groups across the country, he said, referring to different countries' demands for different ethnic groups to be included in the governance.

"We have Tajiks, Balochs, Turkmens, Nuristanis, Uzbeks, and a number of other ethnic groups," he added.

"If by inclusivity they mean the participation of diverse ethnic communities in Afghanistan and people from different regions of the country, then our current cabinet and government meet that criteria," he asserted.

If former President Ashraf Ghani's government was considered inclusive, then all of the people who worked in the previous administration have been kept in the current administrative system, he argued.

"And if by inclusivity they mean political opposition figures have a seat in the cabinet and other high positions of power, then please show us an example of such a government where opposition figures are also occupying positions of power," he asked, adding, "We have never requested Mr. Biden (US President) to give a seat to Trump (former US President) and his cabinet members, so why are they asking us?"

Muttaqi also spoke about the country's security, saying that when US and NATO forces failed to bring peace to Afghanistan despite spending billions of dollars, the Taliban did so with limited resources, but "they still do not know what more these want from us."

He invited the international community to engage with them and discuss the reforms they want in the country.

"We proposed that we work toward it through cooperation rather than pressure, because pressure techniques have failed to produce results for the past 20 years and are still being used, implying that lessons have not been learned," the acting Afghan diplomat commented.

In response to a question about human rights violations in Afghanistan, Muttaqi accused the US and its former allies in the country of imprisoning and killing thousands of innocent people while no one spoke out.

The Afghan acting foreign minister also expressed concern over Washington's move to freeze Afghanistan's funds, sarcastically stating that the US has forced millions of Afghans into a humanitarian crisis, which no one considers to be a violation of human rights.

Muttaqi, who arrived in Pakistan with a high-level ministerial team on Wednesday, met with Foreign Minister Shah Mahmood Qureshi and other cabinet members responsible for trade, finance, and aviation.

Muttaqi is scheduled to meet with Prime Minister Imran Khan later on Friday.

He said the government has reopened 100% of hospitals and health centers across the in the last two months, as well as 75% of educational institutions.

"We asked the international community to help us in paying salaries to teachers, but these have so far ignored our request, instead of asking to open schools," he stated, adding that from where do they manage all of these institutions since the US has stopped their funds.

He added that western countries also have stopped aid to all of the country's hospitals and health centers.

"Despite the economic difficulties, we have started paying salaries to 500,000 civil servants who worked for the previous government but were not paid, and they have all returned to their duties," he informed.

His government has not dismissed a single woman and has invited all of them back to work, he said.

The Taliban's top diplomat also welcomed the peace talks between the Pakistani government and Tehreek-e-Taliban Pakistan (TTP), the major militant group in Pakistan, and assured Islamabad of Kabul's continued support.

He also claimed that all anti-Pakistan elements have left Afghanistan, and he expressed hope that the Pakistan-TTP peace process would be extended.

"We will do everything we can to ensure that the territory of Afghanistan is not used against anyone. The people of this region have suffered a lot, and we must not allow this suffering to continue," he said.

He also expressed gratitude to Pakistan's government and people for hosting millions of Afghans for the past four decades.

On Monday, Pakistan Information Minister Fawad Chaudhry said both sides have reached a “complete” cease-fire and engaged in “negotiations” in line with the country’s Constitution.

Chaudhry also said Afghanistan’s Taliban interim administration has “facilitated” the talks aimed at restoring peace in the country’s restive northwestern tribal region, which borders Afghanistan and is a former stomping ground of the militant network.