1st grain ship out of Ukraine to anchor off Istanbul on Tuesday: Turkish defense minister

Grain-loaded ship that left Ukraine under historic deal to anchor off coast of Istanbul on Tuesday for joint inspection, says Hulusi Akar. 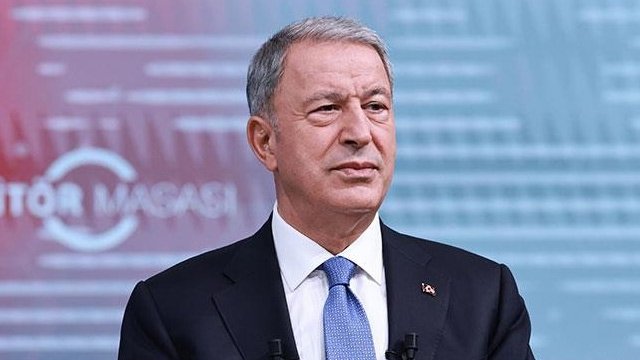 A grain-loaded ship that departed from the Ukrainian port of Odesa will be in Istanbul on Tuesday at 12 p.m. GMT, Turkish National Defense Minister Hulusi Akar said on Monday.

"The ship will be anchored off the coast of Istanbul around 1500 (local time) for a joint inspection," Akar said at Anadolu Agency's Editors' Desk in the capital Ankara.

Akar's remarks came after the first grain-loaded ship departed from Ukraine's port of Odesa for Lebanon earlier on Monday. Loaded with corn, the Sierra Leone-flagged dry cargo ship Razoni will arrive in Istanbul on Tuesday, and it will continue on its way to the port of Tripoli following inspections in the Turkish metropolis. The ship is carrying a cargo of 26,527 tonnes of corn.

Akar said that the efforts on grain shipments from Ukraine will continue, adding that this matter is a "humanitarian issue."

"The next ships will continue likewise without any disruptions," he underlined.

Türkiye, the UN, Russia, and Ukraine signed a deal on July 22 to reopen three Ukrainian ports -- Odesa, Chernomorsk, and Yuzhny -- for grain that has been stuck for months because of the ongoing Russia-Ukraine war, which is now in its sixth month.

To oversee Ukrainian grain exports, a joint coordination center in Istanbul was officially opened on Wednesday, comprising representatives from Türkiye, the UN, Russia, and Ukraine to enable the safe transportation by merchant ships of commercial foodstuffs and fertilizers from the three key Ukrainian Black Sea ports.

Akar said the global food crisis had to be addressed, adding that it was "at a point where it can trigger migration. It may bring along a serious wave of migration from Africa to Europe and Türkiye."

On grains and chemicals awaiting shipment out of Russian ports, Akar said Türkiye would "be glad" to contribute on that issue as well.

Asserting that Türkiye would continue with its counter-terrorism operations resolutely, the minister said that a total of 2,226 terrorists had been "neutralized" this year alone.

Turkish authorities use "neutralize" to imply the terrorists in question surrendered or were killed or captured.

Türkiye's only aim is to protect its citizens' security and has "no eye" on any other country's territory, Akar said.

He added that the sole targets of Türkiye's counter-terrorism efforts are terrorists and pointed to the endeavors of its forces to ensure the security of local ethnic groups.

Akar also highlighted Türkiye's fight against the Daesh terror group, also known as ISIS, in both northern Syria and Iraq.

Ankara expects countries to understand that its only targets are terrorists, said Akar, adding: "We have made efforts to stabilize the region."

In 2013, Türkiye became one of the first countries to declare Daesh/ISIS a terrorist group.

The country has since been attacked by the terror group multiple times, with over 300 people killed and hundreds more injured in at least 10 suicide bombings, seven bomb attacks, and four armed assaults.

On a recent attack on the Turkish Consulate-General building in the Iraqi city of Mosul last week, Akar said this incident showed the real perpetrators of attacks against civilians.

Reiterating Türkiye's readiness to investigate and cooperate on uncovering the truth on a recent attack in the Duhok region, also in northern Iraq, the Turkish defense chief said the security of Iraqis "must be ensured. We have voiced our will to cooperate with our Iraqi brothers and will continue to say it."

Last Wednesday, Türkiye's Consulate-General in Mosul was attacked while a UN Security Council meeting was addressing the situation in Iraq. No casualties were reported.

On the council's agenda was the earlier attack in Duhok, which Türkiye says was the work of the terrorist group PKK, which often hides out in northern Iraq to plot attacks.

Akar underscored that there is no difference between the PKK terrorist organization and the YPG, its Syrian branch.

Last year alone, scores of civilians and security forces lost their lives or were injured in terrorist attacks carried out by the PKK in Iraq.

In its more than 35-year terror campaign against Türkiye, the PKK -- listed as a terrorist organization by Türkiye, the US, UK, and EU -- has been responsible for the deaths of more than 40,000 people, including women, children, and infants.

Regarding a message by the US Central Command (CENTCOM) openly voicing sympathy for PKK/YPG terrorists, Akar said this was an "abdication of reason."

"There is no explanation for it. Our American allies will be upset when they remember it one day," Akar added.

Türkiye has long criticized US support for the terrorist PKK/YPG. While Washington claims it fights Daesh/ISIS terrorists with the help of its PKK/YPG allies, Ankara says using one terror group to fight another makes no sense.

Upon a question about whether the US would give up on supporting the YPG, the minister said: "It will give up. You cannot live with terrorism, with terrorists. They will understand this eventually."

The defense chief also stressed the importance of a potential deal with the US on the sale of F-16 fighter jets, saying that a technical meeting between Turkish and American officials would be held on Aug. 15.

"If our air force is strong, not only Turkish Air Force will not be strong but NATO will also be strong," he noted.

Voicing hopes that the deal would yield "positive" results, Akar said that if not, the world "has expanded and so have our options. A counter option could be made."

After its unfair suspension from the F-35 program, Türkiye has sought to broker a deal with the US for the sale of F-16s and upgrade kits for earlier models of the fighter jet.

An approximately $6 billion deal would include the sale of 40 newly built F-16V fighter jets and modernization kits for 80 F-16 C/D models that the Turkish air forces have in their inventory.

In early May, reports appeared on some US news outlets claiming that several lawmakers were in favor of the deal.

Akar also commented on moves by Athens against Ankara on the F-16 deal, saying they amounted to an "unfortunate attempt" by Greece and that the country's attitude was "abnormal."

Emphasizing the necessity of dialogue to overcome issues standing between Ankara and Athens, Akar said Türkiye was never a threat to its allies.

"In all official and informal meetings, we call on Greece to meet and talk within the basis of international law ... We urge dialogue but they don't come. We want to talk and meet because we're strong," he added.

Akar also cited Greece's decision to increase its defense spending fivefold, underlining that Athens is "up to something" against Ankara.

Still, this will "not be enough against Turkish forces and Türkiye," the national defense minister asserted.

He further stressed that issues between Türkiye and Greece should not reflect on the EU and NATO's relations with Ankara.