Türkiye's 4th drill ship off to Mediterranean for hydrocarbon exploration 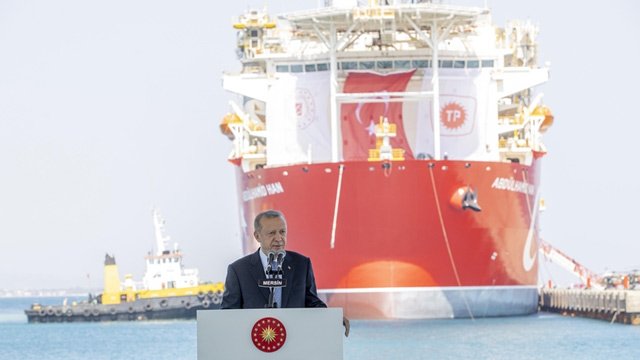 "We will send our ship, Abdulhamid Han, to the Yorukler-1 well, 55 kilometers (34 miles) away from (Antalya's) Gazipasha," Erdogan said during a ceremony for the first mission of Türkiye’s 4th drill ship Abdulhamid Han at the Tasucu port in the country's Mediterranean city of Mersin.

Erdogan added that Abdulhamid Han drill ship is "the symbol of Türkiye's new vision" in the field of energy.

The president said Türkiye has a "rare" drilling fleet in the world with its ships Fatih, Kanuni, Yavuz, and Abdulhamid Han.

About natural gas exploration, Erdogan said: "Now, with four drilling ships and two seismic research ships, we are also engaged in this field."

He added Türkiye carries out exploration and drilling operations in the Mediterranean within its jurisdiction, saying: "We do not need anyone's permission for this."

Erdogan also noted: "We are planning to finish the operations in the 10 wells required for the first phase of Black Sea gas and to start putting the natural gas acquired from there into service for our nation in 2023."