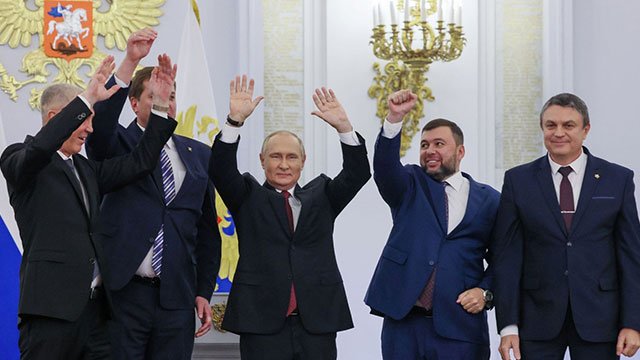 Russian President Vladimir Putin announced on Friday the “accession” of Ukraine’s four regions to Russia. Speaking at a ceremony in the Kremlin, Putin said the referendums took place, “results are known, people made their choice."

Putin also said he has no doubt the Russian parliament will support the establishment of these four new regions in Russia. “Donetsk, Kherson, Luhansk, Zaporizhzhia used their right to self-determination, enshrined by the UN,” he added.

The Russian president said Moscow is ready to return to peace negotiations with Kyiv but will not revoke the results of the referendums, and their residents have now "become Russian citizens forever." The Russian Foreign Ministry on Wednesday said over 98% of people living in the Ukrainian regions supported the "accession" to Russia.

On Sept. 23-27, Ukraine’s separatist regions of Donetsk and Luhansk and Russian-controlled parts of Zaporizhzhia and Kherson held referendums on joining Russia. The referendums have been condemned by the international community, with European nations and the US calling them "sham" and that they will not be recognized.