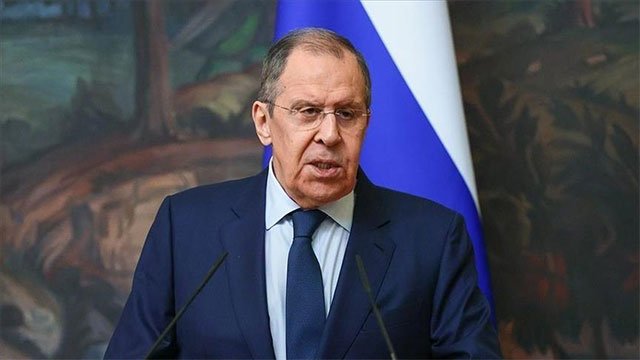 "Yesterday (Thursday), Zelenskyy called on his Western masters to launch a preemptive nuclear strike against Russia," he noted, saying that the call is "another proof of threats by the Kyiv regime." He added that in January, the Ukrainian president voiced his ambition to get nuclear weapons for Ukraine,

Lavrov recalled that Russia's military doctrine only allows the defensive use of nuclear weapons. He also warned the West against further involvement in the conflict in Ukraine and twisting facts about Russia's nuclear policy in an attempt to intimidate the world.

"We once again warn the United States and other sponsors of the Kyiv regime against becoming more deeply involved in the situation as parties to the conflict.

"Our military doctrine and policy of nuclear deterrence remain unchanged. The attempts of Washington and its vassals to distort this reality and our position are aimed at intimidating the international community, forcing its sane part to follow a failed course of reckless support for Kyiv in all its adventures," the minister said. In addition to "lies and threats" against Russia, NATO and the EU continue to vouch for Zelenskyy, who started to dictate his terms to both the alliance and the bloc, he said. The US and its allies take "huge responsibility" for the dangerous growth of international tension, by "pumping weapons into the Ukrainian regime" despite Kyiv's openly proclaimed nuclear ambitions, according to Lavrov.

On Thursday, speaking at a virtual address to the Australian Lowy Institute, Zelenskyy said: "(NATO) must rule out the possibility of Russia using nuclear weapons (through) preemptive strikes so that they know what will happen to them if they use (nukes)." Turning to climate change, Lavrov said Russia is against restrictions on fossil fuels, imposed by the West.

Russia continues to defend the need to maintain a balance between the work on countering climate change on the one hand and the tasks of socio-economic development on the other, he said.